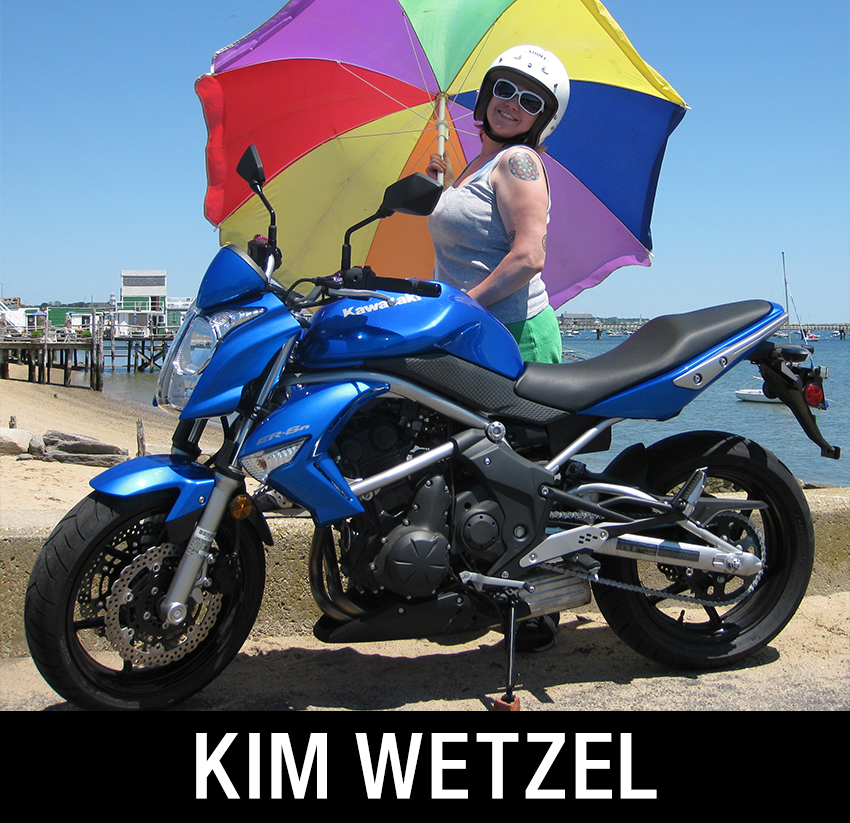 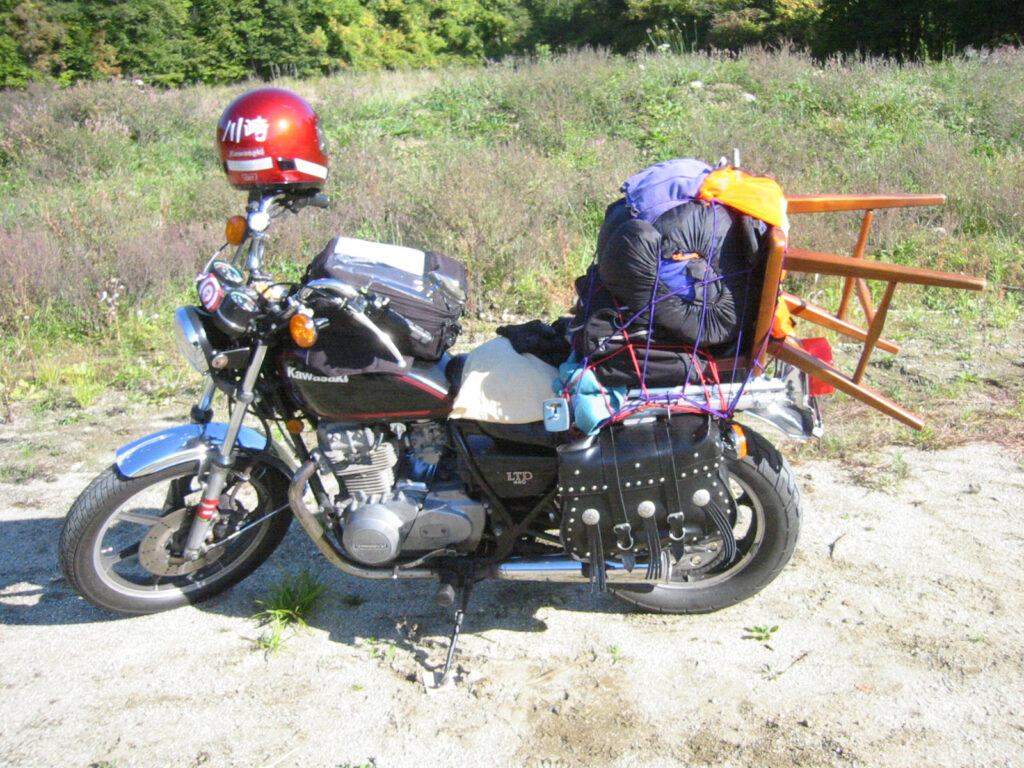 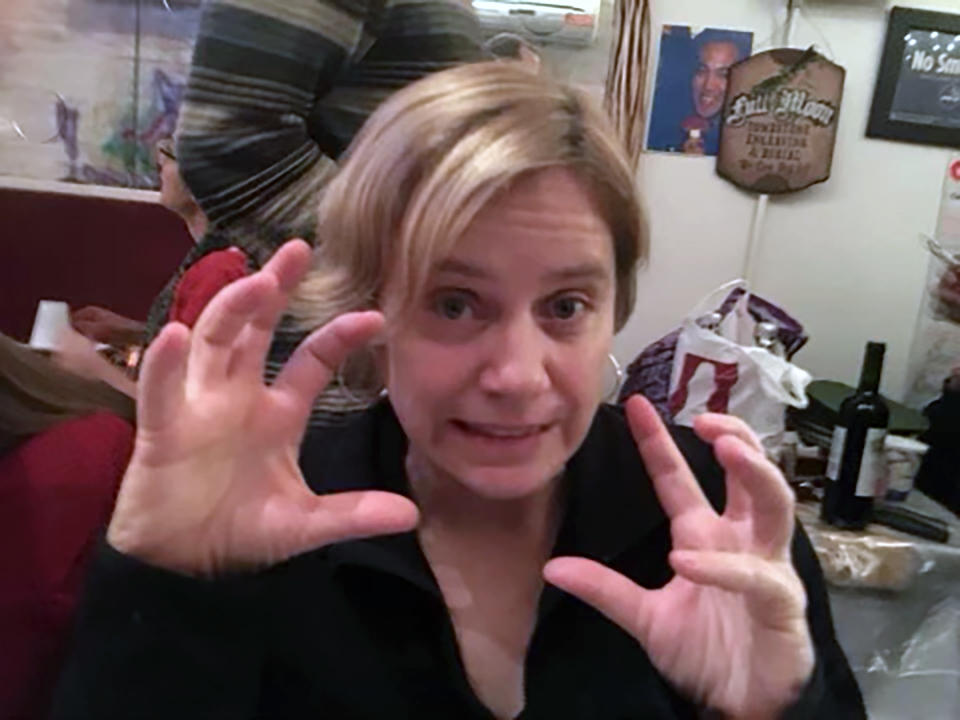 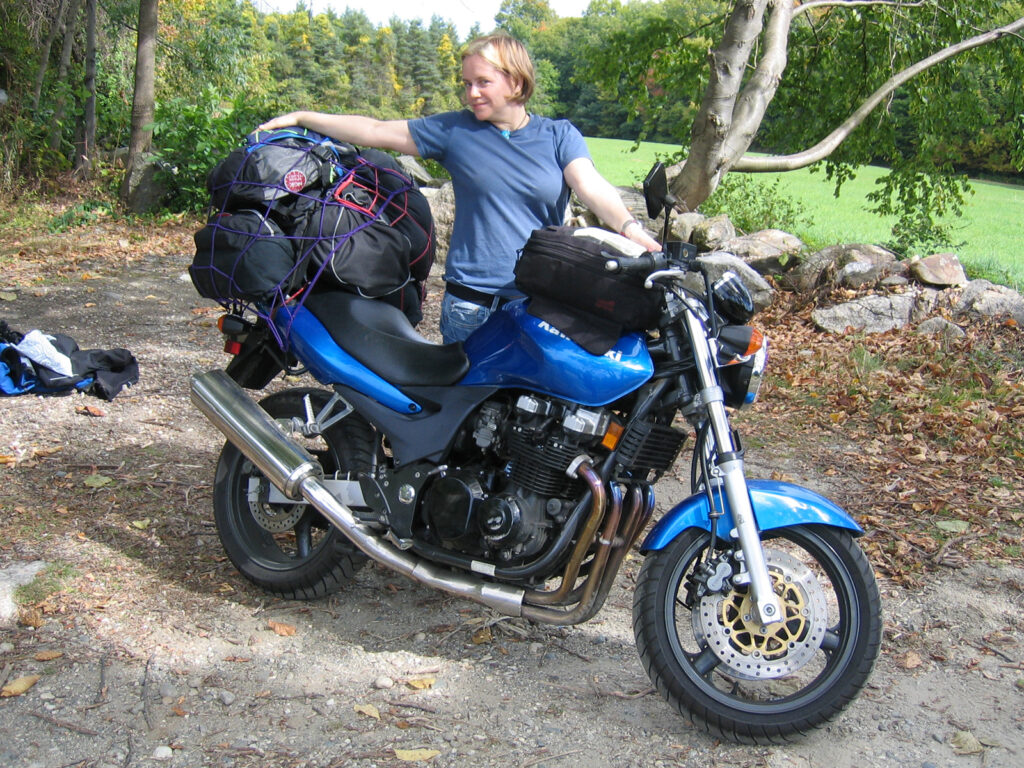 Kim Wetzel roared into the Sirens’ scene on her 1984 Kawasaki KZ440 in November 2003. From the first time speaking with her, it was clear that her brain worked differently than anyone else I knew. She could combine the topic at hand with a global subject in a split second, contrasting the two topics in a hysterical and mind-bending way.  She noticed details that no-one else did. “Kdub” could create a nickname on the fly or break into song with made-up lyrics that crossed today’s happenings with last month’s crisis. So fast! So vast! So funny and clever! Kimasaki’s unbound and unpredictable mind was applied liberally to motorcycling and fashion. One year at NYC pride, she rocked a retro, slicked-back butch look with rolled-up T-shirt sleeves. Another year, she was a bubble gum chewing, purple princess! After Kim upgraded her ride to a 2009 Kawasaki ER-6n, her pride outfits and motorcycle decorations grew more flamboyant with bright-colored flowers, more rainbows and loads of glammy glitter. Kim wore it all and was adorable always! “Kdoob’s” desire to bring it all to the party led to unusually large piles of stuff on her motorcycle. Kim had been going to the Berks Run and the PTown for years before joining the Moving Violations M.C. in 2014. At these events, she would pack it all — then get more things during the weekend!  I can remember helping her incorporate a full-size wooden chair from a Berks yard sale into a bungee mountain of bags and rolls with very little room left for Kim in the front. Somehow she always arrived safely and never left a trail of belongings on the road. Kim Wetzel was born at a Naval Air Station in Lemoore, California on September 23, 1969. She grew up in Lansdale, Pennsylvania with her younger brother, Marty, and her mother, Judy. Kim’s father, Kenny, was a pilot for the Navy, working at a research and development base, where a plane crash took his life in 1974. Judy raised the kids on her own until she met Chip in the late 90’s, and from then on, Kim and Marty had two moms in a time when it was nearly unheard of.  Kimberly Robin Wetzel passed away on March 29, 2020, from complications caused by the COVID-19 virus. She leaves behind Judy & Chip, Marty and his wife Allison, and their children Kenny, Charlie, and Henry.  We are all going to miss Kim’s creative mind, unique sense of humor, and her wide array of mediums for self -expression. Here are a few of her artistic accomplishments: At the Sirens’ 25th-anniversary talent show, Kim delivered a solid motorcycle comedy routine and then played tambourine while singing back-up vocals as “Tina Tuna” for the Sirens’ GrrlRock band. She knitted, baked, and made killer chocolate mint bark! Kim created an extremely persuasive Powerpoint presentation showing how we would make great roommates AFTER we had dated; I was convinced! She was a gifted photographer, famously capturing the gorgeous curves of Alyssa’s Motoguzzi. She was a wonderful painter as well as collage artist and has displayed her art at NYU, where she was employed for the last fifteen years. She spoke Spanish and French and was learning to play guitar. She was also a Scrabble ninja master! Kim was a great friend, riding partner, co-camper, girlfriend, inspiration, roommate, and ex. She listened, gave advice, had my back, put me in my place, and forgave me over and over. Whenever I saw Kimber, I couldn’t help but smile with excitement from my face and into my bones, because I knew I was about to experience something enlightening, outlandish, ridiculous, hilarious and unexpected. It was a privilege to have known Kim and to be around her exquisite mind. I miss her terribly.
“KaPers / Kitty Pee Hands”