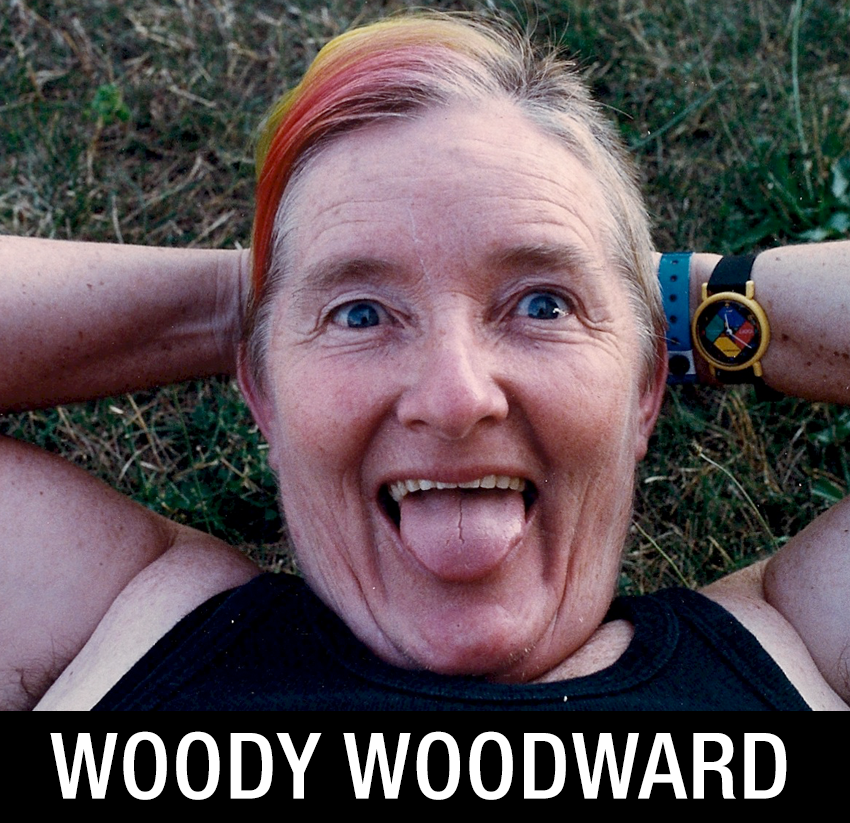 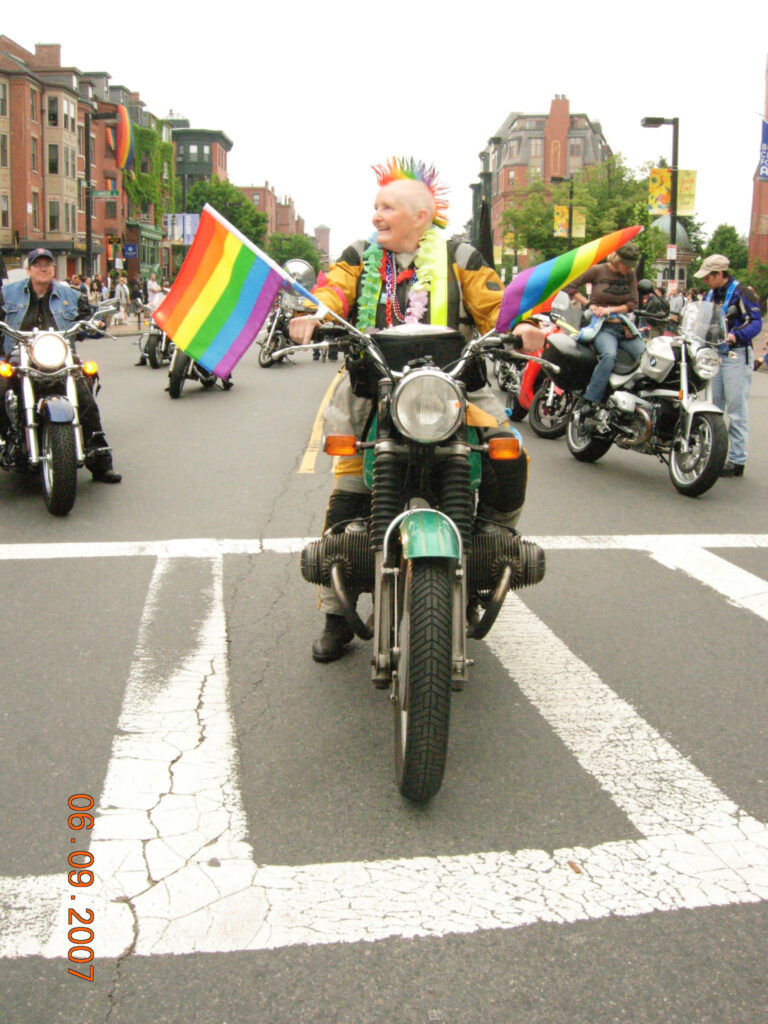 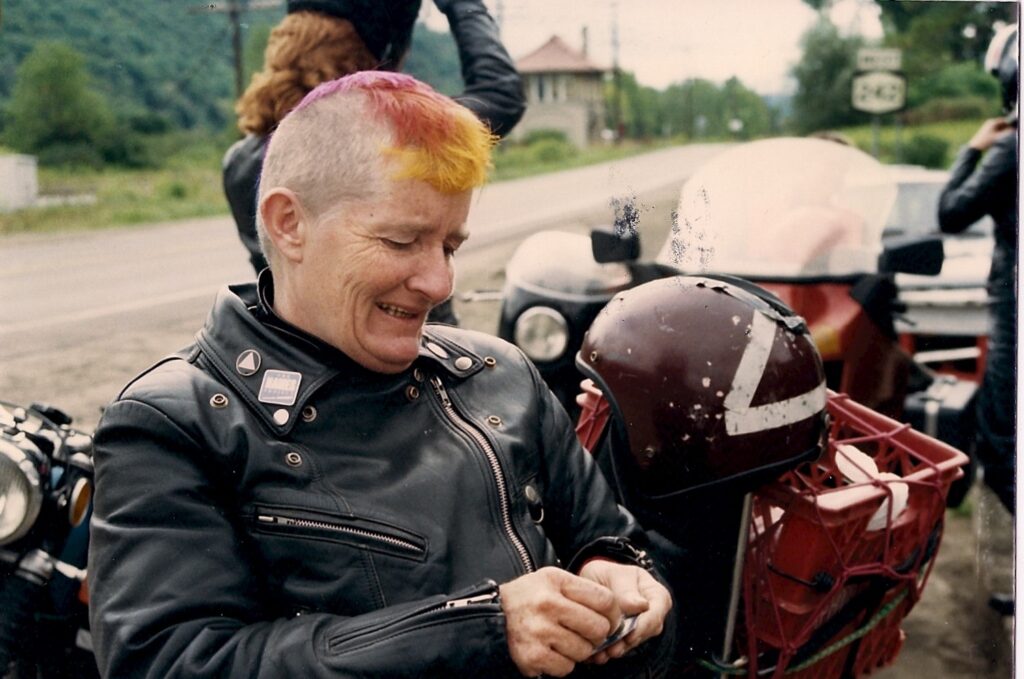 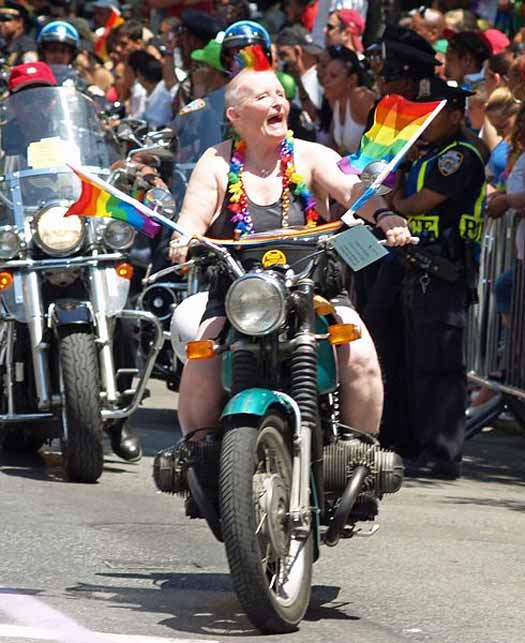 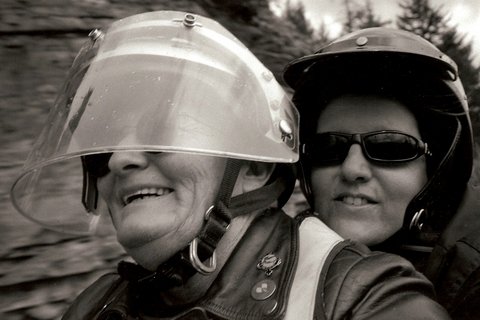 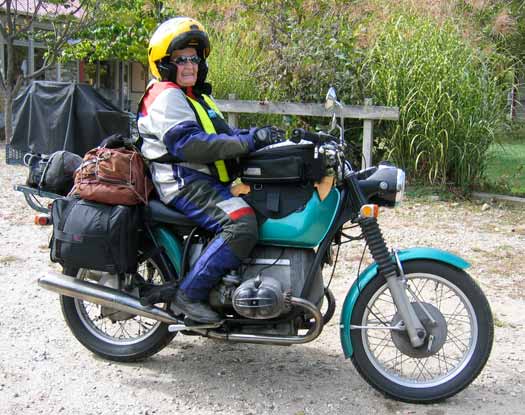 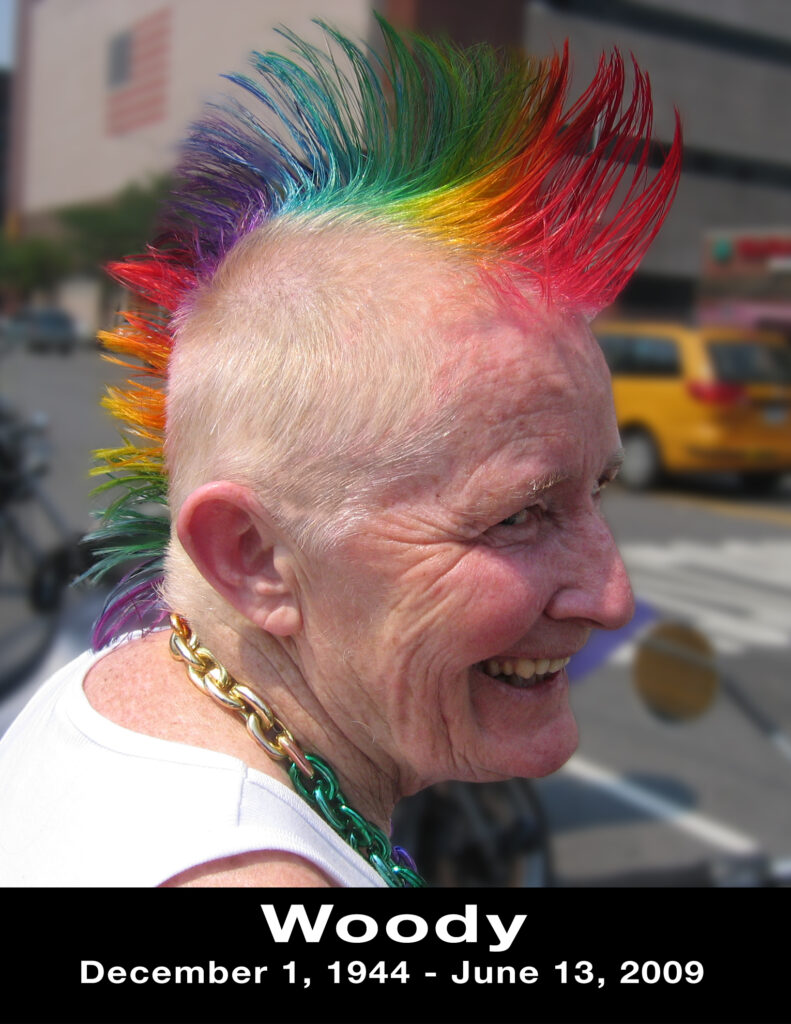 From Sue Slate
Woody Woodward… Consummate Rider, Adventurer and Philanthropist Gone but Most Assuredly, Never to Be Forgotten!
Our world lost a most valuable Peaceful Warrior on Saturday, June 13, 2009.  Woody (Donna) Woodward, one of the founding members of the Moving Violations Motorcycle Club, a member of the Motor Maids, Inc., BMW Motorcycle Owners of America, American Motorcyclist Association and central member of the Women’s Motorcyclist Foundation’s all volunteer army, passed peacefully in her sleep after a valiant battle against ovarian cancer.

Pride Days in Boston and New York will never be the same without Woody and her infamous Rainbow Mohawk which helped to make her one of the most identifiable icons in gay communities and in society at large.  Woody was not to be denied.  She simply and directly worked her way into everyone’s heart.  It did not matter whether your politics were far left, far right or in between.  Woody was such an unforgettable, gregarious, loving, giving character; people from all walks of life fell in love with her.
Woody was a motorcycle adventurer and philanthropist of the highest order.  As an explorer, she always took the path less traveled. As a philanthropist, she gave of her time helping to raise millions of dollars towards the cures for breast cancer and .HIV/AIDS.
We first met Woody in Barnstable, MA on Cape Cod.  We were attending a Memorial Day party. Suddenly, we heard Woody, from above, barking orders to a crew of women helping to lay down a layer of new shingles on Lin Weatherby’s roof.  That was in 1982.
Over the years, we became aware of Woody’s many talents as a carpenter, painter, wallpaper hanger, chimney sweep, mechanic, tour guide, archaeologist and limo driver.
Over the years we would receive postcards from Woody with postmarks from North Africa, Viet Nam, Cambodia, Laos, Thailand, Europe and Australia.
During the early 80’s, Woody decided Mainland China would make an interesting place to visit. So, she talked herself into a teaching job in the hill country of China. There she taught English to Chinese citizens, many of whom likely now speak English with a Boston cabbie’s accent. Did we mention that Woody was a limo driver… often to the stars such as Lily Tomlin?
Woody often got to her destinations in unique ways.  Once, Woody worked on a freighter to travel down under. There she bought a used motorcycle, explored Australia, sold the bike and worked another freighter home.
When Woody turned 50, she sent herself to Viet Nam, again she bought a used bike, this time a dual sport mount.  From Viet Nam she traveled solo all over Southeast Asia.
Woody gave her time to many causes; two in particular stand out, the eradication of two devastating diseases.  In doing so, she inspired others to do the same. The irony, as a Peaceful Warrior and volunteer staff member for the Women’s Motorcyclist Foundation, Woody was instrumental in helping to raise over 2.25 million dollars to fight breast cancer only to succumb to ovarian cancer.
Woody also worked tirelessly to raise funds and awareness around HIV and AIDS. She was without question, the most colorful ride guard on the AIDS. fund raising walks in Boston and bicycle rides from Boston to New York where she encouraged riders and walkers in her Xena: Warrior Princess, Wonder Woman or Pink Rabbit outfits aboard her green 1970 BMW /5.
Woody did so much for so many through her passion for life on two wheels that, the City of Boston, through its Mayor the honorable Thomas M. Menino declared June 7, 2008, Woody Woodward Day in Boston!

As a dual sport rider on Adventure for the Cures, (see:  HYPERLINK “http://www.firstgiving.com/adventureforthecures” www.firstgiving.com/adventureforthecures ), Woody had already raised $2000.00 off line to serve as a member of the “Dirty Dozen.” She donated the use of her BMW F650GS for this effort and was also scheduled as a volunteer to work at the International Women and Motorcycling Conference in Keystone, CO August 19 – 22, 2009.

Woody put all of her most recent plans into place knowing full well that her treatment options were shrinking as the malignant tumors were growing, having metastasized throughout her abdomen long before. Despite the challenges Woody faced confronting the monster that is cancer, two weeks prior to her death she was telling us, in reference to the “Adventure for the Cures” campaign, “Well, I may not be able to ride every day or all of any day; but I’ll be there just the same.”

And so Woody will be there, just the same.  She’ll ride as a member of the “Dirty Dozen” on Adventures for the Cures – Ride to End Breast and Ovarian Cancers.

Long time friend, Peg Preble, will be carrying some of Woody’s ashes and riding proxy for her revered friend. As the “Dirty Dozen” stops along the way to remember those we have lost, to honor those battling and to renew our pledge to help create a cancer free future, Peg will distribute a few of Woody’s ashes.

Help us share the incredible legacy that Woody has left us. Woody continues to challenge each of us to look beyond ourselves towards the greater good and to live life to the max. As Woody often shouted, at the beginning of ride day, usually at O’ Dark Thirty, “I’m ALIVE, I’m AWAKE and I FEEL GREAT!”

Thank you Woody! You have enriched the lives of so many.  You have taught us well by doing it all on your terms. Ride on Sis!